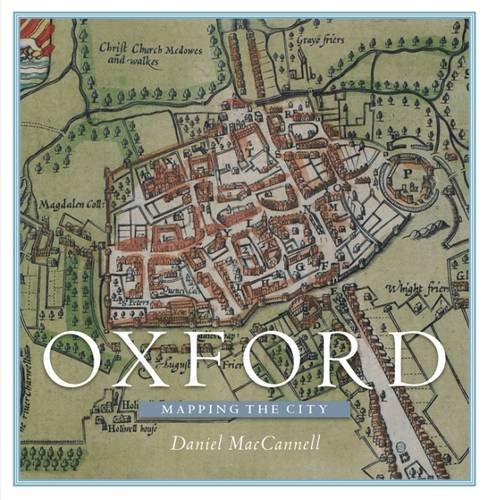 One of the tests that can be applied by a book reviewer is whether the work in question leaves the reader wanting more, and that is certainly the case with Oxford: mapping the city. This is a handsomely produced work, profusely illustrated, with the text written in an interesting and engaging style. Categorising the work is a slightly more difficult question. Ostensibly it is about maps – the third in Berlinn’s ‘mapping the city’ series, and the second authored, or co-authored, by Daniel McCannell (the other was on Edinburgh). In practice it is both more and less. Part of the enjoyment of the book is that in its 250 or so pages it provides a potted history of Oxford from a time well before the first map of the city was produced until the present day. Obviously it cannot do this comprehensively, but since all of the short chapters are based around specific maps, it does so in a unique and relevant way. Since the presentation of the maps is chronological, it also gives an insight into the social history of the city, with the emphasis shifting from turnpikes and canals through railways and sewers to cemeteries and flood control.

As the author freely admits, with several hundred maps from which to choose and space to include only fifty-nine, he has had to be extremely selective. Some of those included, such as the c.1600 manuscript map of Waram Banck (just to the west of the castle) are rarely reproduced and particularly charming. Quibbling with his selection would be a little unfair and the only notable omissions are the earliest surviving manuscript map of Oxford showing part of Grandpont (probably c.1500) and the enigmatic manuscript map of the city in the British Library’s de Chaulne atlas (probably c.1640). Omitting the Hollar maps of the city (there were actually two versions) is justified for the reasons given by the author. The scenographic map based on the 1578 survey of Radulphus Aggas (more usually Agas) deservedly merits a chapter, but perpetuates some myths. Agas was paid by the university in 1578 for a survey of the city, but there is no evidence to support the contention that it was accompanied by a drawn map (sadly the survey has not survived). As MacCannell mentions, it was the eighteenth century before it became commonplace for land terriers to be accompanied by maps. The Oxford map was published by Agas in 1588 and Augustine Ryther is stated thereon to be its ‘delineator’ (drawer) – he almost certainly engraved it as well, but this is not stated on the map, or elsewhere. David Loggan was a gifted portraitist, highly competent architectural draughtsman and first-rate engraver, but he had no training as a surveyor (as stated here) and had only engraved one city view while working in London (a reduced version of the 1616 Visscher prospect of London in Daniel King’s broadsheet on Old St Paul’s). His updated version of the Agas/Ryther map of Oxford in Oxonia Illustrata has been rightly praised, but he may very well have employed one of his numerous assistants to aid him in the updating. Moreover, the map is stylistically very different from the ichnographic map of Cambridge he engraved a decade or so later for Cantabrigia Illustrata, again almost certainly not surveyed by him. Benjamin Cole’s map of Port Meadow is certainly worth including, but given that the author mentions the horse racing regularly held in the meadow around the end of the seventeenth century, it may have been of more interest to the reader to include the later (c.1705) version of the map, which shows the position of the teardrop-shaped racecourse and also includes a vignette of the historically interesting St Martin’s Church and its vicinity. Sutton Nicholl’s South prospect of the City of Oxford, a chorographic view rather than a map, is also worthy of inclusion, but the fact that it is a modified re-engraving of Jan Kip’s earlier Prospect of the University and City of Oxford that appeared in Britannia Illustrata is not mentioned.

The sources of the illustrations are all provided (although the original of the Waram Banck map is in the Bodleian: Wood 276b f.16 – the Oxfordshire History Centre version is a photograph by Henry Taunt) and there are suggestions for further reading, but detailed footnotes for the various quotations are not given.

The book’s format (25.5 x 25.5 cm) is slightly smaller than two recent comparable works published by the Bodleian Library – Oxford in prints by Peter Whitfield (28 x 25.5) and Treasures from the map room by Debbie Hall (28 x 27.5). The differences may not seem large, but every little helps when the original size of the maps being illustrated can exceed 120 x 80 cm. This is partially compensated for by some excellent photographs showing details from the maps selected, but given its extremely damaged and darkened condition the inclusion of half a dozen images of the Agas/Ryther map is of questionable value. It may have made more sense to include details from the 1728 facsimile of the Agas/Ryther map by Robert Whittlesey, mentioned by the author, but not illustrated.

Overall? Having read the book, I would certainly not wish to lose it from my library of books on Oxford, notwithstanding the peccadilloes. I shall certainly be dropping hints that the other two books in the series, on Edinburgh and Glasgow, would make suitable gifts for my next birthday.

Graduating from St. Edmund Hall, Oxford in 1973 with a degree in physics, he spent all of his working life in finance gaining along the way an MBA from Bradford in 1978 and an MSc in Risk Management from City in 2000. His serious interest in history commenced in 2009, when he began to research the origins of a Victorian charity founded by a wealthy brewer, of which he had been a trustee for some years. This culminated in the award of a PhD from Kingston in 2012 for his thesis ‘Henry Gardner’s Trust for the Blind: formation, development and decline (1879-1945)’. This research also sparked his interest in Fred Burnaby, who in 1870, when still a captain, had travelled to St. Petersburg with Henry Gardner’s daughter and son-in-law. Other historical research interests include: military actions of the North-West Frontier and Boer War, in both of which his maternal grandfather served with the Gordon Highlanders; the maverick MP for Windsor between 1876 and 1890, Robert Richardson-Gardner; the leading British anthroposophist, Harry Collison; and the art and architectural history of Oxford between 1566 and 1750.
Previous Five minutes with… Jem Duducu
Next Five minutes with… Dan Snow

History on the Box

Apple Tree Yard has finished, Endeavour is over and Sherlock is no more. What can …